Posted on October 20, 2014 by themarkgrimm
Reply

Does a “pre-owned” car run any better than a “used” one? When did we start defining “screw ups” as “breaches in protocol?” The last time a kid at McDonald’s messed up your order, did you complain about the “breach” in your bag? 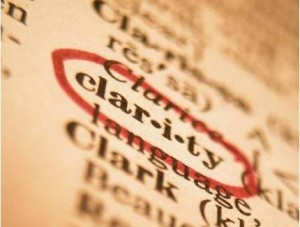 Clarity Is a Skill

The Internet has forced an explosion in the volume of communication but how are we doing on the quality? I’m tempted to say, “less than optimal,” but then I would be falling into the same doublespeak trap.

The Internet and social media are starving for clarity. Simplicity is not simple. It’s a skill. Better communication in the communication century will require a new approach. Try these five straightforward suggestions:

1- Spend Less Time On Spinning People, More on Helping Them

2- Avoid a lot of big words. They don’t make you smarter, they make you less likely to be understood.

3- Be plain spoken and conversational. Attention spans are shorter than ever. Don’t assume people will stay tuned in. They won’t. Get to the point.

4- Be visual. Use pictures and video to shape your story and use your words to create images in other people’s minds.

5- Be genuine. There’s something special about everyone. Let yours shine.

The direct access to people we now have is the greatest communication revolution since the printing press. What do you intend to do about it?