Posted on August 22, 2014 by themarkgrimm
Reply

A Dating Naked reality show contestant is suing because the program showed her naked. You couldn’t make this up. 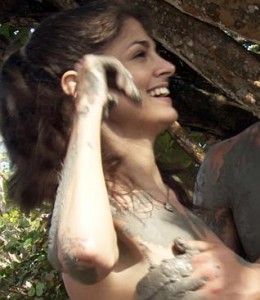 28-year-old Long Island model Jessie Nizewitz claims in a $10-million lawsuit that the VH1 network and the produces told her they would blur out her private parts. They didn’t…..when she was mud wrestling.

Oh, it gets even better.

Her lawyer, Matthew Blit, is the “patron saint of pole dancers,” according to the Daily News, for his vigorous representation of strippers.

Nizewitz told Entertainment Weekly she “was shocked, horrified and outraged to observe this intrusion into her privacy for all to see.” This from a woman who revealed her birthday suit for the shooting. She also told the NY Post her boyfriend hasn’t called her back since the episode aired. And her grandmother is mad at her. Can you blame grandma? The bridge club is going to be a little awkward this week.

Can there be a better example of someone seeking her 15 minutes of fame? If she was really concerned about her privacy, a high-profile lawsuit would be the last action to take, so the use of a lawyer such as Evansville personal injury attorney, is perfect for these lawsuits.

Of course, this publicity stunt is working. The unknown model is all over the tabloids and morning news shows. Can a Barbara Walters’ interview and a Playboy shoot be far behind?

The publicity will certainly boost the show’s mediocre ratings. So VH1 is likely smiling a bit. Release forms almost always favor the producers so there would have to have been a major legal screw up for Nizewitz to have any chance in court.

In the court of public opinion, the verdict is already in: once again the line has been blurred between fame and shame.

The writer is a speaking coach and communication strategist with 30 years of on-camera experience.