The 66-year-old from Savannah, Georgia admitted during a sworn deposition last month she has used the N-word. The deposition involves a lawsuit from a former employee who is suing for alleged sexual and racial harassment at Deen’s restaurant.

In 2012, Forbes estimated Deen’s annual earnings at $17 million so she stands to lose millions as sponsors cut ties with her.

Deen’s 13-minute appearance on The Today Show Wednesday produced a glaring contradiction in her story. She told Matt Lauer she only used the N-word once in her life — during a bank robbery in 1986. But in her deposition, when asked if she’s used the word since the robbery, she replied, “I’m sure I have, but it’s been a very long time.” She also said there is a mean and “non mean” use of the word. When asked if it is mean to use it in a joke, she said, “Depends on how it’s used in a joke.”

Deen did tell Lauer “every one of God’s creatures was created equal” and that many “hurtful lies” are being circulated about her. Her tearful appearance did arouse sympathy in and support from many viewers, while many others remain unconvinced.

1- Set the record straight on her use of the word
2- Condemn any use of the offensive term
3- Stop suggesting her problems are a result of “sabotage”
4- Settle the lawsuit. Its disclosures will add fuel to the story.
5- Take effective racial sensitivity training
6- Have African Americans who believe in her speak up for her

Deen is a genuine “rags to riches” story and Americans appreciate the fact people have evolved over the years on racial understanding. But Deen needs to cook up a much better response or her empire will get scorched.

The writer, a former TV anchor/reporter, is a crisis communication expert and media analyst. Don’t hesitate to contact him for help. 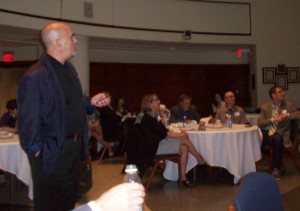 Marketers and creative directors don’t speak the same language. How do we fix that?

Multiple Emmy Award winner and the former Creative Director at NBC Steve Lance says the friction between the two groups won’t improve until they speak the same language.

“Defining process is critical,” said Lance, speaking at an Albany Ad Club event in upstate New York. As Lance puts it, creative people don’t like process…. until they see it work for them.

Lance says giving creative people clear direction on what is needed, rather than trying to dictate to them how to do their work, will produce more positive results. Just because creatives are free spirits, that doesn’t mean they don’t want clarity. As the late Ogilvy and Mather legend Norman Berry often said, “Give me the freedom of a tightly-defined strategy.”

Lance says marketers need to reach customers “in an emotional place” and the creative people must be aligned with that effort. He emphasizes “actionable research” that’s relevant and digestible and having a specific strategy document that leads to measurement everyone can understand.

One more tip for bringing the two groups together, “Have pizza at the meeting. It’s a cue it won’t be about the blame game.”

Mark Grimm is a former TV anchor who runs a message strategy and speaking coaching business. Don’t hesitate to contact him for help.

Posted on June 5, 2013 by themarkgrimm
Reply

A woman who didn’t want to be interviewed by a Providence TV reporter had her two pit bulls attack the reporter. View a clip of the incident:
Dogs Bite Reporter

(1) How hard should you press for an interview?
Getting interviews no one else gets makes the careers of journalists and persistence is admirable and necessary. But was the reporter here (Abbey Niezgoda) persistent or too reckless? Once the woman (Melissa Lawrence) started throwing rocks Neizgoda and videographer Marc Jackson should have left the scene. No story is worth your life and this could have been a fatal incident. After all, Lawrence, a mother whose daughter had just been shot, had no obligation to speak to anyone.

As the tape shows, Neizgoda even went back to Lawrence after having been bit. She’s got guts, no doubt, but the pit bulls could have killed her.

(3) What is appropriate behavior when being bugged by the media?
This requires some reasoned thinking and never includes siccing your pit bulls on the news team. Lawrence committed assault and deserved to be charged (two felony counts). When pressed by reporters, never lose your cool. If you do, that’s certain to make it on the air. Be calm and persistent about not being interviewed. That ends it right there.

Every news reporter/videographer team in America should be discussing today what their expectations are of each other on a shoot that becomes dangerous. It’s critical they are on the same page before something explosive occurs.

The writer is a former TV news anchor/reporter and an adjunct media professor at the College of St. Rose.