Posted on February 25, 2014 by themarkgrimm
Reply

Capital Region business leaders say about two-thirds of their job applicants have fair or poor verbal and writing skills. Just one percent, they say, are excellent. This revelation (and others) “bolsters the concern of the skills gap in the community,” said Michael Tucker, a top area voice on the economy, speaking to the Business Review.

A new Siena Research Institute survey of area business executives indicates good communication is lacking in the “communication century.” Though we are consuming information at an unprecedented rate, our ability to make the most of the Internet age needs vast improvement.

This problem can be fixed. First, our schools have to regain their focus on the basics, writing and speaking. Too often, our schools are tugs of war over social engineering and advocacy. How many stories have you seen on bullying in the news? How many have you seen on poor writing skills? That’s not to suggest bullying is acceptable, it isn’t, but more emphasis is needed on core skills.

Recently, a college student of mine complained because I took points off her writing assignment for poor grammar. “You didn’t say that would count,” she protested.

Second, we need to lead by example. In fact, the press release (see below) announcing this survey presents an enormous “improvement opportunity” — a product of poor clarity, graphically challenged and real work just to read. 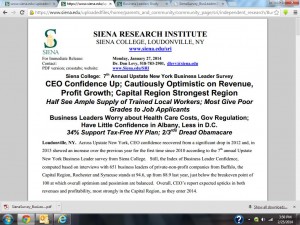 Business leaders should consider more investment in communication training, for themselves and their team. I’ve seen many senior executives perform ineffectively when given the luxury of a large audience. We must see attention as a commodity, especially today.

Technology has given us a wonderful set of tools to communicate, but being interesting is a skill. All of us play a role in enhancing the skills needed for a stronger economy and a better society.

The writer is an award-winning communications trainer and a longtime adjunct media professor.

Posted on February 17, 2014 by themarkgrimm
Reply

The worst aspect of NBC’s excruciating interview of Olympic skier Bode Miller is the network had time to fix it..and it didn’t. NBC aired the tape in prime time, hours after the event took place. Managers had time to discuss what to do and still made a premeditated decision to exploit the skier.

It’s a journalist’s job to seek raw truth and capture the genuine emotion of the people they cover. For the first three questions, interviewer Christin Cooper did just that. Miller’s loss of his younger brother last year is a compelling part of his story which he has willingly discussed in the past. But Cooper’s clumsiness after that, as if she wasn’t listening to what he was saying, served no purpose other than to spark a firestorm of criticism.

The worst of it was leaving the camera on the sobbing Miller and even following him down the path where he eventually fell to his knees. Does no one at NBC understand when to take your foot off the pedal? Apparently not. In fact, the network actually defended its actions in a statement the next day:

Basically, it’s the viewers’ fault for overreacting, not their fault. NBC’s second dose of insensitivity speaks volumes about their judgement (or lack of it). Miller graciously did defend NBC, but that doesn’t change what happened.

The botched Bode Miller interview and NBC’s poor response will further cultivate a public perception that journalists are heartless SOB’s that will do anything for ratings. This harsh broad brush is a disservice to many ethical journalists who really do care about the pursuit of truth.

My own view is that many journalists are not aggressive enough with the people they interview, especially politicians, and too often take what they are fed at face value. This is often due to inexperience or being spread to thin or being concerned what the public might think if they press on. It’s too bad what took place on a Sochi mountain has made that pursuit a bit more difficult.

The writer is a former TV news journalist and current adjunct media professor at the College of St.Rose.

Posted on February 13, 2014 by themarkgrimm
Reply

The Derek Jeter story is not about his stats. They’re impressive, but others have even better ones. His story is not about his championships. Five is great, but others have more. Jeter is second only to Babe Ruth as the ultimate Yankee because people still believe in the adage actions speak louder than words. They take comfort in it when one of their heroes lives it to the max. 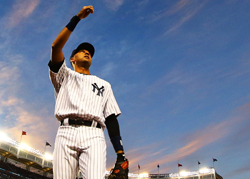 Tradition is a fragile commodity. It doesn’t survive without re-enforcement. Even the great Yankee tradition was on the rocks when Jeter arrived. Fewer than 17,000 fans were in the old Yankee Stadium for his first game there. The Yankees weren’t what they used to be. No one understood that better than Jeter, even as a teenager. He had always dreamed about playing shortstop for the Yankees, a dream he said in his retirement announcement, “I’ve never had to wake up” from.

He was Rookie-of-the-Year in 1996 and the Yankees won the World Series for the first time in 18 years. That’s a long drought for a tradition. Four more championships followed. He had help, of course, but he was the defining constant in one of the national past time’s best restorations. He wasn’t flashy, he didn’t criticize other players, he didn’t taunt them and he never blamed something else for a poor performance. And while others were grabbing headlines and money by cheating, he never took steroids.

The greatest leaders, whatever their pursuit, see their role as part of something bigger than themselves. For Jeter, this wisdom and humility seemed to come naturally. And it rubbed off on many of the others around him. He is the consummate role model for the legion of kids that adore him.

His farewell tour this season will probably make him uncomfortable. He’s never been one to toot his own horn. His fans won’t let him go quietly. They believe too much in him, and too much in actions speak louder than words.

The writer is former sportscaster who’s been a Yankee fan for 50 years.