Posted on September 29, 2014 by themarkgrimm
Reply

OK, we gave Derek Jeter a wonderful departure, one he deserved. Now what? For the first time in more than 20 years, the Yanks missed the playoffs for the second year in a row. There’s pinstripe trouble. 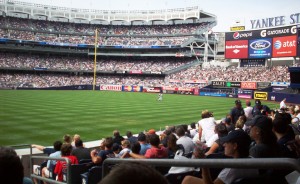 Management hasn’t been able to replace the “Core Four” with anything close to championship caliber. They have saddled the team with big contracts for aging veterans well past their prime (i.e, A-Rod, CC, Teixiera, Beltran). It is disturbing to see how a $200-million plus payroll can be so squandered. Despite the money, the Yanks ranked 13th out of 15th in the league in runs scored. No player had more than 75 RBI’s.

Complaining about injuries has gotten really old. George Steinbrenner is rolling over in his grave.

Let me take a swing at solutions:

1- Unload the “Failing Four,” any way they can.
Plea for retirements. Sometimes, appealing to pride is all you have left. Sadly, A-Rod, Beltran, Tex and CC will embarrass themselves if they play next year. A-Rod turns 40 and hasn’t topped 18 homers since 2010. Teixera hit just .216 this year, striking out 109 times. He hit just .151 last year. Beltran can’t stay on the field and CC had lost his fastball (4.78 ERA in 2013) even before his latest injury, from a slip, so he decided  to get a slip attorney to help him with this.

2-Tougher Manager
Joe Girardi has been too soft on his players and it shows. It is the manager’s job to get the most out of his players. Can anyone say the Yanks performed up to their abilities? I’d give the “new Joe” one more year to produce because he is a high-character guy who knows what winning looks like.

3- Sign and Trade Robertson for a first baseman
Closers are in demand and Robbie could bring in a good first baseman to fill that hole. Betances slides into the closer role. Have to give up a good player to get one.

4-Sign Cruz/Martinez and one of the big pitchers
Due to woeful offense, they must sign Nelson Cruz or Victor Martinez. Also, take a good shot at either Scherzer, Shields or Lester in pitching market.

5-Shake up the front office
Despite the Yankees’ many advantages, they just haven’t produced the WS titles they should have. They have become an organization too slow to pull the trigger on personnel at the top. Time for a change in the GM spot.

The writer became a Yankee fan in the 1963 World Series between the Dodgers and Yankees, even though the Yanks scored just four runs in four games.

Posted on September 1, 2014 by themarkgrimm
Reply

The ice bucket challenge will be a fixture in PR classes for years to come. More than $100 million was raised in a month, about 35 times more than the same time period last year. The awareness of ALS has skyrocketed.

What was the secret to the amazing success?

1- Social Media
Everyone on Facebook is a publisher today. These “editors” determined it was newsworthy and gave the story life.

2- Genuine Origin
The story “went viral” because the challenge began with someone with ALS, Peter Frates, who issued a challenge to other athletes.

3- Visual
If a picture is worth a thousand words, video is worth even more. Getting an ice bucket dumped on you is visual and visuals count. And since everyone reacts a bit differently, each video is somewhat unique.

4- Technology
Without ease of use, technology fails. It’s become so easy now to tape and post video from smart phones, the masses had a chance to participate…easily.

5- Something New
Most fundraising is about copying what has worked before — walks for the cure, charity golf tournaments, etc. There’s no substitute for a clever new idea in today’s communication universe where people’s attention is a precious commodity.

Today, your good cause has company. There are thousands of them and all of them have access to the Internet. Think out of the box, be visual, present genuine stories and keep it simple.

Maybe you can produce the next big thing.

The writer is a communications/media consultant and speaking coach.