In just eight days, my Facebook video post (beware deplorable language) revealing shocking protester behavior towards police has drawn nearly 1.5 million views. Over 26,000 people I do not know, from all walks of life, have shared the brief video with others.

The video strikes a nerve and reaction to it sends a message worth noting.

Many media outlets, some political leaders and a few race-baiting profiteers have painted a picture of America with contempt for police. New York State’s Attorney General said “everyone is at risk” because the trust between police and the communities they serve has broken down.

Yet, thousands of comments from those who watched the shared video tell a different story. These citizens present overwhelming support and empathy for law enforcement and a rising tide of anger on how all police are being portrayed.

Rusty Devine commented: “If they (the protesters) truly thought cops were that bad would they be in their faces like that? NO WAY!!!” Victoria Van Soest Hare wrote, “So sad…The next generation…We’re screwed!!!!!”

Some responses have come from African-Americans, including this one from Nyetta Abernathy: “We need to teach our children how to take their anger and use it in a productive way. This is terrible and makes the situation worse.”

No police misconduct is acceptable. Those who misuse their authority should be held accountable. But targeting the police avoids the more difficult challenges.

A Justice Department report reveals black youth commit violent crime at a rate five times higher than whites. And other blacks are the most frequent victims of their crimes. This gap is a result of many complex social, economic and cultural problems. Change will only occur when those issues are addressed, working together. Sticking a middle finger into a cop’s face won’t fix anything.

Connect with Mark on LinkedIn. 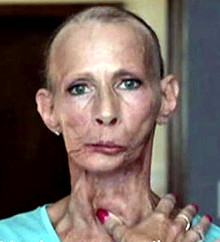