Posted on August 5, 2015 by themarkgrimm
Reply 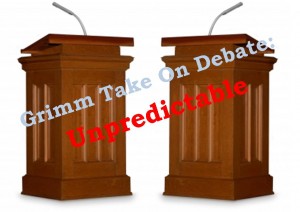 The first GOP presidential debate tomorrow night is unpredictable. That’s why such a big audience is expected.

A New Hampshire focus group conducted by pollster Frank Luntz produced “an explosion of passion” that Luntz labeled “one of the best focus groups I’ve ever done.”

As a speaking coach and former elected GOP official, here’s what to watch for:

1- Can Donald Trump appear both brash and thoughtful? Trump’s lead in the polls can be attributed to his striking a nerve on illegal immigration and his anti-establishment persona. But knocking over the apple cart isn’t enough. Presidential candidates have to be capable of fixing what’s wrong. He must convince people he has the right temperament to handle the most sensitive, and dangerous, situations. Personally attacking people will harm him with voters in the middle, the ones he would need to be a viable general election candidate.

2- Jeb Bush is in the opposite position. He’s a thoughtful, serious man who can put people to sleep. He has to show passion and convince primary voters he’s got the fight to take on Hillary. He has to be more than Bush Three.

3- Wisconsin Governor Scott Walker has to show he’s up to the task on foreign policy. Iran, Moscow, North Korea — they are a long way from Madison, Wisconsin.

4 – Each of the remaining candidates needs to carve out some niche that resonates with primary voters. Clarity counts.

How well the three Fox News moderators handle the 10-candidate showdown is anyone’s guess. It won’t be easy, especially with The Donald.

Mark Grimm is a professional speaker, speaking coach and former GOP Town Board member who has made hundreds of media appearances as an analyst. More on his political consulting can be found here.