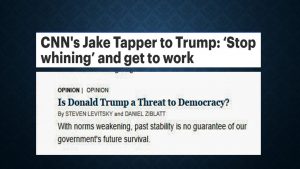 Posted on November 10, 2011 by themarkgrimm
Reply

How can an “objective journalist” be tweeting their opinions or posting them on Facebook? The social media revolution has created an enormous dilemma for reporters and editors with no simple answers.

AP social media guidelines for employees are clear, they “must refrain from declaring their views on contentious public issues in any public forum” because those expressions “may damage the AP’s reputation as an unbiased source of news.” Yet, journalists have to be on social media. No one engaged in gathering and reporting news can ignore what millions of their viewers, readers, and listeners are saying. We also have learned effective social media requires two-way communication with transparency from all those involved.

This problem is exacerbated by the blurring line between journalist and commentator. Our cable “news channels” are filled with anchors who blast away daily with opinions so personal they could scrape paint off the wall.

Like it or not, journalists are commodities. Their business role is to develop a following, a constituency that will ultimately consider buying the products and services from advertisers that pay the journalist’s salary and benefits. Those constituencies are now being built by interactive mass communication.

There are journalists who genuinely believe being an advocate, too, is a path to a better society. To that I say, on whose terms? Isn’t the best path having a profession of hard-working people pursuing the truth each day and leaving the conclusions up to the people they serve?

It is a hard thing to bite your tongue on issues you know well. But, sometimes, it goes with the job.