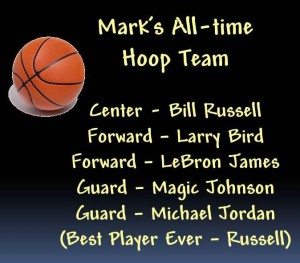 The NBA Finals start this week so let’s pick the best ever. The greatest player of all-time was not Michael Jordan. It was Bill Russell. The top players will tell you,”it’s about the rings,” — NBA championships. Russell won 11 of them in 13 years with the Celtics. No one else is close. Jordan had six titles, Magic Johnson had five. Russell revolutionized the way the paint could be controlled. He averaged more than 22 rebounds a game for his career. Russell also led the University of San Francisco to two national championships in the mid 50’s. It hasn’t won one since.

Magic and Michael are my two guards, though Oscar Robertson and Jerry West may be closer behind than most people under 50 realize. Magic made everyone around him better. In the 1980 Finals, he stepped in to play center to replace the injured Kareen Abdul-Jabbar and responded with 42 points, 15 rebounds and seven assists — one of the greatest performances ever. Jordan was the best marketed player ever which has a lot to do with his top ranking in many people’s minds.

My forwards are Larry Bird and LeBron James. Larry Bird took Indiana State to the national title game. No other player could have done that with a small school team that was below .500 when he arrived. Bird, more than any other player, made everyone around him better. In his first year with the Celtics, the team record improved by 32 games. He won three NBA titles and a bad back may have prevented more.

There’s just no stopping LeBron James. The best player of his era, his blend of power and quickness is unmatched in the game’s history. He carried Miami to the NBA Finals in all four seasons he played there. Miami missed the playoffs this season. He has brought Cleveland to the NBA Finals in his first year back there. Players can’t wait to play with him.

My second team has Jabbar, forwards Tim Duncan, Karl Malone, along with West and Robertson.

The writer is a former play-by-play college basketball announcer who became a NBA fan in 1966 when his brother, Karl, bet 50 cents on the final NBA championship game.