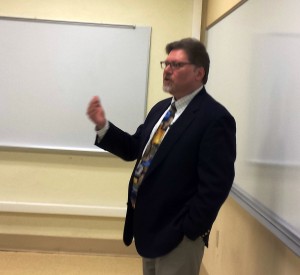 Longtime Albany TV news man WNYT-TV13 News Director Eric Hoppel says, “I never know what my day will be like.” It’s an appealing feature of a job that comes with ongoing challenges — increased competition, lower profit margins, tough budget scrutiny and playing the role of psychologist for employees.

Hoppel rose to his position as a leading voice in upstate NY journalism the old fashioned way, he earned it. He started in glamorous Altoona, PA as a weekend TV news producer, working 14-hour days while getting paid minimum wage for eight.

News is “what interests or affects people,” he told a College of St. Rose media class. While we “all cover the same big stories,” Hoppel says his department tries to distinguish itself by trying to tell why a story is important, adding special segments like Athlete of the Week and 13 Kids Who Care and maintaining an experienced staff that has deep community roots.

Is there room for all the local news stations to survive in the Albany TV market? “I don’t know” is his candid answer. The new realities are that you will see more one-man bands (a single person performing as reporter, videographer and editor). Hoppel says he’s learned to be creative about how to cover the things you really want to cover but don’t have the budget to do it the way you might have had in the past.

His advice for young job seekers, “If you want a job in TV news, be a producer.” They are the most in demand, according to Hoppel, a former producer himself. Whatever your chosen field, “there will always be a need for good communicators and good writers.” Some of my students smiled at that, they’ve heard that a few dozen times from their professor.

What jazzes the boss the most? When we do a story about a person and he or she calls to say, “Thanks, that helped me.” Hoppel added, “I also love it when we do a good story no one else has.”

The passion still lives. You can’t survive the business without it.

The writer is a former TV news anchor/reporter and adjunct media professor. He helps clients with media strategy and training.